ârcolac warriors kidnap a woman with a unique bloodline for their town’s re-population program, but the willful doctor incites a mutiny, and the leader of the Warrior Class has his hands full containing the revolt…and his burning attraction for the exasperating woman.

Toni’s stomach gave a start and then a funny flutter at the sight of him. Powerful muscles stood out in rigid relief against the tight fabric of his gear, his body so clearly articulated with grooves and crevices he could’ve been held up in anatomy class as an example of the perfect male specimen. These are the quadriceps, class, this, the tibialis anterior, and this part right here between his legs is the…oh, my.  Let’s just all make a ‘yum’ noise, shall we.

Toni briefly closed her eyes. She really needed to get some help.

“Well?” he pressed in a peeved tone. “I asked you a question.”

“Yes, I’m…uh…” I’m here to steal a key card so that I can instigate an escape plan. She covertly scanned the room for inspiration on another excuse, figuring the truth wouldn’t go over well with a man of Jaċken’s temperament. It was then she noticed just how black his bedroom was: black wooden dresser and entertainment center, sleek black lacquered wet bar, black bedspread with a dark gray geometric design on it. Sheesh. If her bedroom was Louis XVI, Dev’s like a cozy room out of a château, then this bedroom—in keeping with the whole French theme—was Marquis de Sade all the way. Well, at least the bedroom fit the man this time.

“I just came to see if, um…” Her gaze zeroed in on a stack of DVD’s in his entertainment center. “If you wouldn’t mind if I borrowed a movie.”

“You ever hear of knocking first? I was about to get into the shower. I could’ve been standing here naked, lady.”

That gave her pause. Despite all logic, the thought of Jaċken naked wasn’t a wholly unpleasant prospect. Not at all, in fact. Clearing her throat, she started forward. “I’m a doctor, Mr. Brun,” she said in the kind of overly patient tone she knew would annoy him. “You surely don’t have anything I haven’t seen before.” Mmm, that was about as big a joke as it had been with Dev.

She drew up right in front of him, and startled as a tingle of sensual awareness lit off a short burst of heat in her belly. She was close enough to smell him now, clean male sweat and a hint of Old Spice deodorant and Irish Springs soap; everything that was completely masculine and just about curled all the fine hairs on her body. An immense power radiated off of him, like the force of a tornado barely held in check, along with determination and confidence and ruthless intelligence, and something…strangely raw.

Her lips parted on a small breath, all that was feminine in her helplessly reacting to him. What was it about this man? How was it that she was even more aware of all the glorious differences between men and women while standing here with Jaċken than she had been with Dev, when he’d been naked as a jaybird?

“Would you mind backing the fuck up?” Jaċken ground out, his nostrils flaring white at the rims. “Being this close to your smell is about as much fun as a fork in the eye.”

Cured, instantly, of all wayward thoughts. Bristling, she plunked her hands on her hips. “Up yours, Jaċken. You’re such a misogynist, I swear to God.” 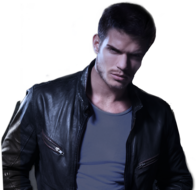