he stopped in front of him, wiping herself down with the towel. “Hi, I’m Charlize.”

He clawed at the wall behind him as her aroma vibrated through his neural pathways so hard it shook some teeth loose in his jaw. She wasn’t wearing any scent-reducing mud behind her ears. Not even a smudge. That his fangs hadn’t unsheathed yet was astounding.

“What’s your name?” She grinned, blazing a hundred and twenty watts at him.

“You—” Speech stopped. He stared at her smile. Her canines were on the pointy side for a human’s. He managed a shallow breath and tried again. “You’re not supposed to be in here.” Had another Vârcolac male been in the gym, Breen’s low, growly tone would’ve snapped the man’s attention over. Predators knew the sound of other predators on the hunt. “This is one of the times when the warriors train.”

“Oh?” She tossed the towel toward a storage cubby on the other side of the door.

“There’s a schedule posted on the wall,” he told her.

“Sorry, I didn’t notice. But also I’m a marathon runner, so, you know”—she shrugged—“I gotta run. First thing I do whenever I arrive at a new place is check out the gym.

”Seemed kind of extreme. She’d probably only arrived here a couple of hours ago, and it had to be nine thirty at night her time—here in Ţărână, they switched A.M. for P.M. with topside time, and vice versa. She should be in bed right now…for more reasons than tiredness. “Didn’t they tell you not to leave your room?”

“No. I was just told not to leave the mansion.” She edged closer. “So you’re a warrior, huh?”

His vertebrae slid together, his spine feeling like it was growing lubricated. For what activity, he wasn’t sure.

“You work with Marissa’s husband, right?”

“Uh...” Only half-listening, he directed his sub-response to her breasts. Sweat had reformed and was making patterns down her cleavage, in beads and streaks, drops swelling, rivulets darting. His own sweat formed around the collar of his workout shirt.

“What kind of stuff do you do when you train?” She tilted her head toward the boxing ring. “Fight?”

“Uh…” he said again. He was getting stupider by the second.

“Do you want to work out with me before your buddies show up?”

The AC needed to go on now or— He stopped short and squinted. “What did you say?”

A smile played at one corner of her mouth, and her eyes crinkled a little. “We could spar in the boxing ring.”He stared at her.

“No.” She laughed, and somehow the noise tugged straight at his balls. “I want you to let me hit you. Nothing too hard.Just something to give me a good arm workout.”

Exactly what he needed: add fang-elongating aggression to what was already a serious Molotov cocktail of lust.

“Come on, it’ll be fun.” She upped the wattage of her smile.

He stared some more. At her smiling teeth. The sharp dig of those pointy canines at his throat would feel… His package started to burn, the throb in his dick nearly unbearable. Throttling off a moan, he tugged at the crotch of his workout gear.

The woman’s attention followed where his hand went—caught! Her focus remained on his crotch for an extra-long moment, then lazily, slowly, her eyes trailed back up his body and she met his gaze again. Her pupils were dilated, hunger in her eyes now…

Shit-nuggets. Get out, Dalakis. Lashing his hand out sideways, he made a blind grab for the door handle. Missed it. He couldn’t take his eyes off her. A force inside him wouldn’t allow it.

“Or we could wrestle,” she suggested in a soft, inviting voice.

He went still. His gnawing hunger made more growly noises in his ears.“I have to warn you, though, I usually win at wrestling. ’Course I’m thinking that’s because men let me.” She tossed him a wink.

Getting horizontal, sweating together, legs and arms entwined, breasts that defy spectacular smashed against me… Another moan worked its way up from deep in his diaphragm. He trapped most of it in the back of his throat. But not all of it.

Her blue eyes sparkling, she let out a playful whoop and jumped him… 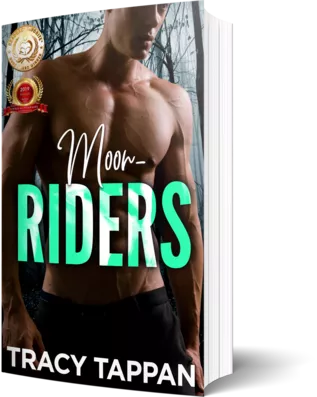