nhaling a deep sigh, Marissa leaned over Dev, reaching for his wine glass with a languorous movement that brushed her breast against his arm.

He stiffened as if she’d just shoved an icy thermometer up his ass.

She turned her head toward him, her lips next to his ear, caressing him with her breath as she said, “I made Osso Bucco for—”

He crashed to his feet.

She yelped as his hard shoulder knocked the wine bottle out of her hand. It flew and flipped, then hit the floor on its side and spun, spraying red wine around her room sprinkler-style.

“Damn it, Devid!” She balled her hands into fists and glared at him through a sudden sheen of tears. “What’s your problem?!”

“Nothing. I…”  He jerked away from the table. “I just think maybe we should go to Garwald’s for a—”

“Oh, I know, you forgot to take your vitamins this morning, didn’t you?” Swallowing back her tears, she crossed her arms beneath her breasts and heated her glare to boiling.

He released a fractured breath. “I’m…not sure what…?”

“Or maybe you put on the wrong pair of underwear.”

His eyebrows crashed together. “What are you talking about?”

She flung out an arm. “I’m just trying to figure out what excuse you’re going to use tonight not to sleep with me.”

“E-excuse?” His Adam’s apple moved up and down. “Why would I do that, Marissa? I’ve just been, you know…”

“Oh, gimme a break,” she snapped back. “From that original groin injury, you’ve gone from ‘I feel like I’m catching a cold’ to ‘I’m kind of tired tonight’ and ‘I have to get up early tomorrow,’ onto incredibly drool-brain stuff like ‘I think we should get to know each other better first’—ha!—and ‘I want you to be sure that I respect you.’ Respect!” she spat the word. “Gee, thanks, Dev, but if it’s all the same to you, I’d prefer to have my knees pinned back to my ears and my ankles swinging while you pound me into the headboard rather than your non-orgasm-inspiring respect!” Which wasn’t entirely true, but she’d had it.

His mouth fell open with a silent clang.

She marched over to her bed and pointed a rigid finger at it. “You get in this bed right now and have sex with me, Devid, or we’re through with this date. I mean it. The only excuse I’ll accept this time is that you don’t have a penis.” She planted her hands on her hips. “Do you have a penis?”

His face turned the shade of a Red Delicious apple.

His face, if possible, stained even redder. “Yeah.”

Humiliation rose up to burn in her throat. Tight-lipped, she asked, “Are my boobs too small, is that it?”

“What?” Dumbfounded, he transferred his gaze to the offending mammaries.

Her voice came out small and hurt, she couldn’t help it. “Why don’t you want me?” God, this was like standing in front of him in her back brace.

His attention shot up to her face, then his shoulders sagged. “Ah, shit,” he moaned, pressing his eyelids with thumb and forefinger. “I do, Riss. So much, you have no idea.”

“You just said you didn’t.”

The realization hit her, bottoming out her stomach. Why hadn’t she figured this out before? He didn’t have a penis, metaphorically speaking, at least. “Oh, crap,” she said in an undertone. “You’re impotent.”

Anger flared across his expression. “No, damn it,” he growled. “Don’t say that word. I hate that fucking word. I’m not…that, not in the way you think. I can get it up, I just need certain conditions to be met first.”

She paused, blinking. Then she exhaled a chafing breath. Oh, this was so much worse. He was a pervert. “You need me to…to…? Pee on you or something?”

His eyes seemed to bug. “Wh-what?” 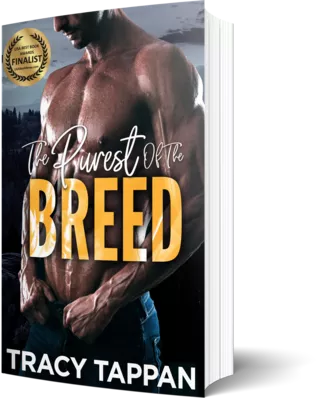