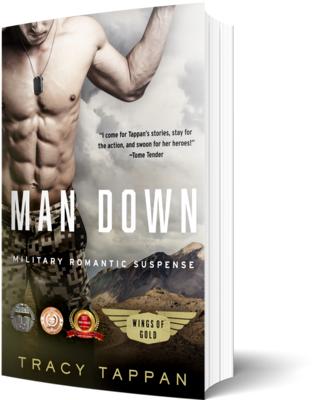 ason planted a boot on the bed and hoisted himself up level with one of a string of windows lining the upper wall of the post-op ward. He hadn’t really expected to see anything when he shoved aside the curtain to verify the security of the front gate, but—

The gate was wide open, and through it was pouring a boatload of men!

“Taliban!” Jason snarled over his shoulder at Shane. “About fifty or sixty men, incoming.”

“Shit!” Shane bit out. “We need to set up a firing position. Pick off squirters as they arrive.” He tried to heft himself to a sitting position on the gurney but didn’t make it.

“With you still seeing cross-eyed? Negative.” Jason jumped off the bed. “Besides, there are too many tangoes.” Who would cover the space between the front gate and this medical tent in about three minutes. “We need to hide, then get the hell out of here.” As soon as fifty backs are turned.

He scanned the room for hiding places. His vision fell on a six-foot-tall cabinet pushed against the wall at the end of one row of beds and set next to a crude nurse’s station. He raced to the cabinet and wrenched open the double doors. Shelves on one side and—yes!—closet space for white lab coats on the other. Hurrying over to Shane, he grabbed two fistfuls of the man’s hospital gown, yanking so hard to get him up, the ties snapped off the back of the gown and the material tore away. Jason stumbled backward, the hospital gown in his hands, leaving a naked and pissed-looking Shane on the gurney.

If Jason had been a woman, he would’ve been impressed. Your friend is packed with solid muscle, Farrin had said. But a quick check of her showed her still pale and distracted.

He charged back over. “Come on!” Looping one of Shane’s arms over his neck, he hauled him off the gurney.

Shane’s IV bag tumbled down to his knees, bobbing on its rubber line.

Jason ripped the needle out of Shane’s wrist while Farrin observed in horror. Sorry, but I don’t have time to follow AMA nursing standards right now. He hustled Shane over to the cabinet and maneuvered him into the coat side. “If it’s me, I’ll knock.” He thrust the H&K 416 rifle into Shane’s hands. “Anybody else opens this door, start firing. And don’t,” he ordered sharply, “pass out while you’re in there.” Sweat beads as big as matchstick heads were already standing out on Shane’s brow.

Jason shut the door, then grabbed his own rifle and the two packs out from under the gurney.

The terrorists were speaking Pashto, probably, the language of both northern Pakistan and Afghanistan, but who the hell cared? It was foreign, and it was bad. He took Farrin by the arm and urged her, half-running, toward the front of the medical tent—toward the voices, which got his heart into a boxing match with his ribs. But that’s where a very large desk was located, long enough to handle his height, but also with concealing sides stretching all the way to the floor.

He darted behind the desk and went down on his knees, tugging Farrin down with him.

“Under!” he hissed, his temples throbbing, his chest on fire with aggression. If he was required to kill again, he couldn’t imagine having a single problem with it.

Farrin lay down on her back and scooted, sideways-caterpillar-style, under the desk.

Pulse hammering, he bolted in after her—on her…which was the only place he could fit, and even then, barely. The space between his back and the underside of the desktop was nil, and it squashed him down on her, hip to hip, his knees to the tops of her shins—he was so much taller than she was. A breath emptied out of Farrin; warm air streamed past his ear.

Feet entered the ward and stomped past the desk. “Kaleem!” was called out.

Jason could feel Farrin’s heart banging fast and frantic against his own. He stared down at her. There was a little light coming from the chair-side of the desk, and he could see the shadows of her eyes. She was scared as hell.

The strange urge came again…to take care of her…to wrap his arms around her and pull her closer. A stupid urge. The concept of women needing comfort and protection was an age-old sham. Underneath their fragile exteriors, women really hid the strength and mettle to crush. They were for keeping at a firm arm’s length, not pulling close.

A terrorist walked too near to the desk... The toe of a sneaker clipped one of the wooden legs.

This was getting painful. His hipbones were jabbing sharply into hers. He was trying to prop his elbows on either side of her to keep his body weight off, but his arms were wedged in tight and not doing the best of jobs. He probably felt like one of the larger variety of livestock on top of her. Yeah…

A grimace crossed her mouth. She opened her knees to the full allowance of the space to gain some relief. The movement created an opening between her thighs, and zuuuup—he slid right into it. His dick and balls, hanging free in a pair of super-loose pajama pants, not even a pair of underpants—which had disappeared with the rest of his clothes—to offer support, had no other place to go but forward. His whole package snuggled flush against her crotch, and…

He parted his lips, a curse forming. He couldn’t imagine worse or more mortifying timing, but he went hard. Just…inflated, as if his dick was attached to a bicycle pump. He clamped his eyes shut, and, behind the backs of his lids, pictured himself leaping out from under the desk and waving his arms at the tangoes. Hey, here I am. Kill me now. The ensuing execution might be better than this. A bead of sweat crept down his temple. Maybe Farrin would do him a favor and not notice.

He checked eyes with her, and— Oh, she’d noticed.