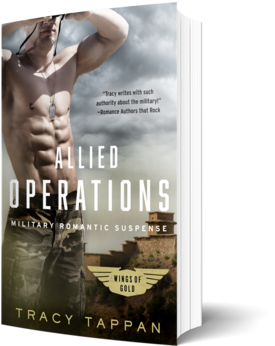 ammit.” Kyle moved over to Samantha's cot and sat down. “I hate doing nothing.”

“Me, too.” She picked up a small, locally made purse off the top of Kitty’s bookshelf and ran her thumb over the colorful Sindhi patchwork design. “But we don’t have a choice. It’s out of our hands.”

Kyle hefted a large breath and glanced outside the tent door. “Nothing to do around this Deliveranceville aid station, either,” he mused. “I never thought I’d get a hankering for a steel beach barbeque.”

She laid the purse down. “What’s a steel beach barbeque?”

“It’s a like a picnic we have sometimes on the ship while we’re underway,” he said, bringing his attention back to her. “We clear the flight deck and put out barbeques, cook up dogs and burgers, maybe set up a basketball hoop in the hangar.”

She smiled. She could imagine Kyle doing all of that. Maybe in a pair of shorts…? “Sounds like a kick.”

He shrugged. “Kills time when we’re not working.”

“I think there’s a movie tonight in the mess tent,” she offered.

“Eleven hours from now,” he complained.

She grabbed a deck of playing cards off Kitty’s second shelf and held it up. “We could play cards.”

Kyle glanced at the cards, then his gaze moved up to her face, holding there for two beats before slipping to meander down her body. One corner of his mouth lifted. “I think I’ve got a better way to chase off some boredom.” He languidly stretched out on her bed, crossing his legs at the ankles and folding his hands behind his head. The pose displayed a set of wide lats and his beautifully formed biceps to perfection. Not to mention that his crossed legs bunched up the sizable bulge at his crotch. “Let’s have sex.”

She hiked a single brow at him as she lay down the card deck. “Because you’re bored?”

“Because it’s fun,” he countered, his voice softening to a velvety rasp, a teasing light dancing into his eyes.

Hello. The seductive predator from the Jebel Ali Club was back. She sighed to herself. This time, however, she knew what waited for her on the other end of Kyle’s charm. How to let him down easily…? She ran her fingers through her bangs as she considered options. She was a firm believer in truth-telling, but she didn’t want to hurt Kyle’s feelings with an outright, No, thank you, it wasn’t enjoyable for me statement. Because beneath this smooth operator, she’d discovered a man with a lot of heart. I seem to be making a nasty habit of killing people on deployments. She’d never forget the hurt confusion she’d seen flicker over his expression when he’d said that.

He grinned. “You’re not going to start playing shy on me now, are you?”

His grin turned into a knowing chuckle.

Oh, boy. “I’m just not a casual hookup woman, Kyle. I’d never had a one-night stand before you, so…” She broke off. Drat. She hadn’t wanted to spill that.

“You are trying to play shy,” he said, his words interwoven with continued laughter. “Look, honey, I know you had a good time with me.

“A guy can tell these things, especially a man like me whose equipment is…hmm, how shall I put it?” His hands whipped out from behind his head and he shot up onto his elbows, his eyes narrowing down to tight slits.

She startled. “What?” Talk about a sudden mood change. “What’s what the hell?”

“You did something with your mouth.”

What had she done?

He swung up to a sitting position, his boots hitting the floor with a solid wump. "Did I hurt you?"

Mayday, mayday. Hard collision with his male ego imminent. “No. It was, uh, a little uncomfortable at first, but then—hey!”

He’d just slammed to his feet, his eyes on fire with a mixture of emotions. Pissed off was a prominent one, but she was reasonably sure she also saw mortified in there.